Here we are at the One Room Challenge Week Five and to say it’s crunch time is an understatement. My photo shoot is in two days and I am frantically styling and tweaking. Being a perfectionist, I struggle with declaring the room finished as I always think it can be better. I could spend days moving things to the right and then moving them back, adding in things, taking them out. 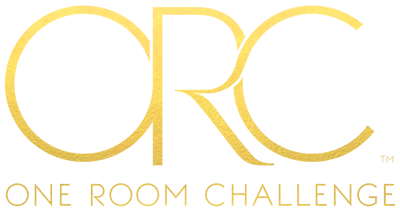 One thing that I haven’t shared with you is that I have been struggling physically with completing my room. My neck, which I have had problems with my entire adult life, has acted up big time. I have been in such chronic pain over the past couple of weeks that by the end of the day I feel like I have an ice pick is embedded in my head. It’s gotten so bad that the pain is running down both arms. I’ve had an ultrasound and see another specialist in a couple weeks. I’m sure stress has aggravated my neck but the timing could not have been worse. Because of my limited ability to lift, I had to call in the cavalry. 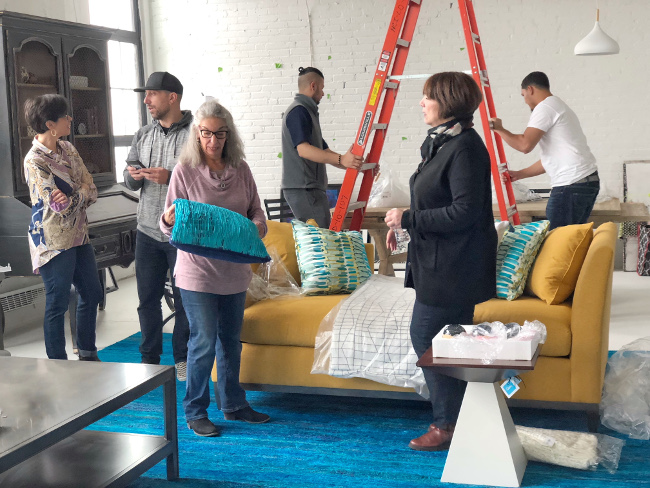 I don’t know what I would have done without their help. I can’t even raise my arms without pain so completing my room was going to be a huge challenge. My friend Nirma went above and beyond and spent three days helping me unload heavy boxes of book and accessories. She even used her super power of speaking in her native Spanish to help me over come a language barrier with the maintenance crew. 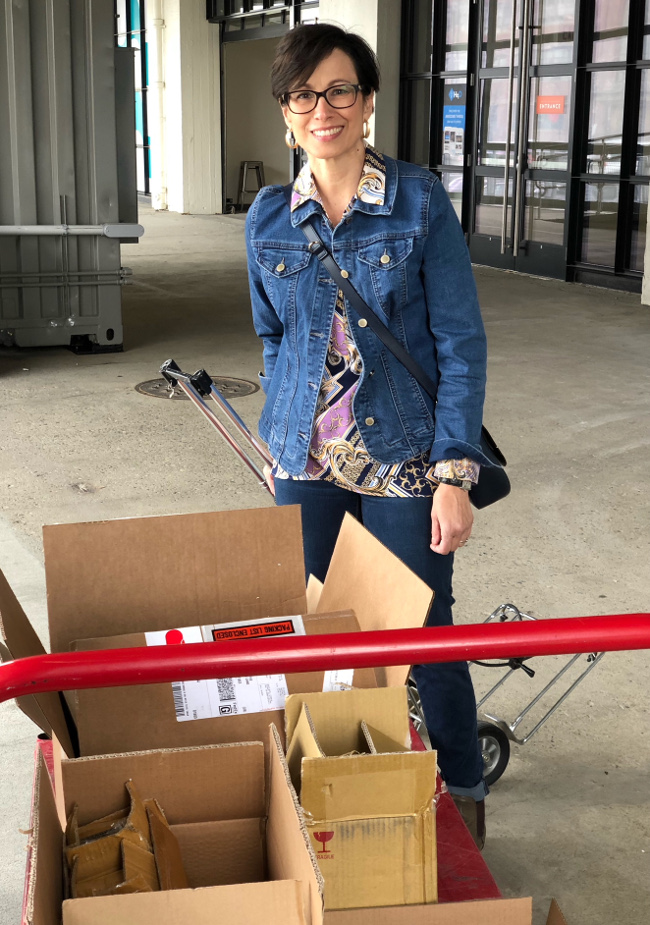 So…One Room Challenge Week Five and with my Calvary’s help my pied a terre is finally looking real. The rug from J D Staron is down and it looks beautiful. The guys were very patient as I called out, “More to the right, now more to the left, no the other left, I see a bump in the middle.” 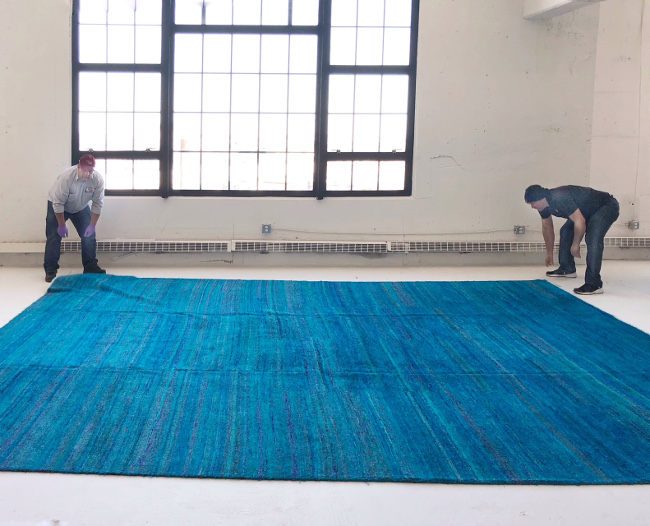 One thing I have learned in my relatively short time working in the design field is that things often don’t go as planned. It was no different with my One Room Challenge. Some last minute liability issues resulted in two show rooms backing out of promised furniture. I have also learned that panicking or making a scene is not helpful. Since I had no control over the situation I worked with what I did have and re-figured the floor plan right there on the spot.

I lost a two chairs, an ottoman, the second bookcase and a big round table. To fill the space I decided to float the settee in the middle of the room and use two chairs in front of the single bookcase on the opposite “wall”. Now that everything is in place I think it might have even worked out for the best. 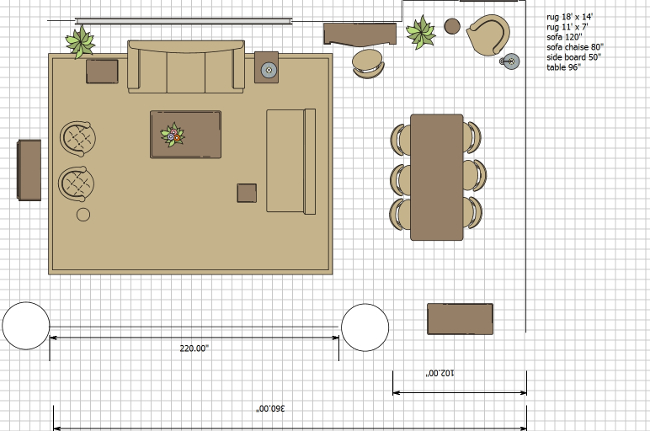 Even though I lost some pieces, I gained some others. I was happy to get a big cocktail table and two end tables from Century. If you are a Boston Designer that works with Century you know what a nice guy Al is. He was so accommodating to my furniture requests and I am very grateful.

You’ll have to excuse my poor photography but I only took quick shots in the showrooms to show the movers what they would be taking.

Gary from the Boston showrrom Duralee, had a fabulous saffron yellow settee made for my space. He also loaned me two of these black and white houndstooth chairs. I love the open arms and tufting detail and I have a client ordering two of them in a different fabric. 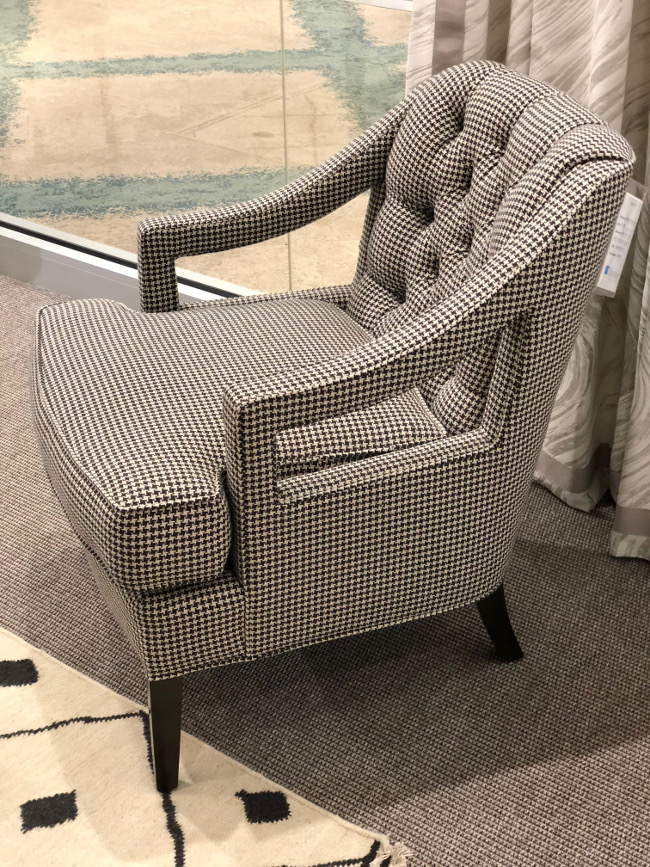 My plan was to style my pied a terre with my personal belonging so that would space will “feel” like me. However, since my husband and I recently downsized and gave away two thirds of our stuff, I was worried I would be short on styling props.Thanks to the One Room Challenge sponsors I secured a few additional accessories to add to my own things.

This turquoise pillow and white throw is from Company C but was donated by One Room Challenge sponsor Bellacor. Did you know they carry tons of items besides lamps? 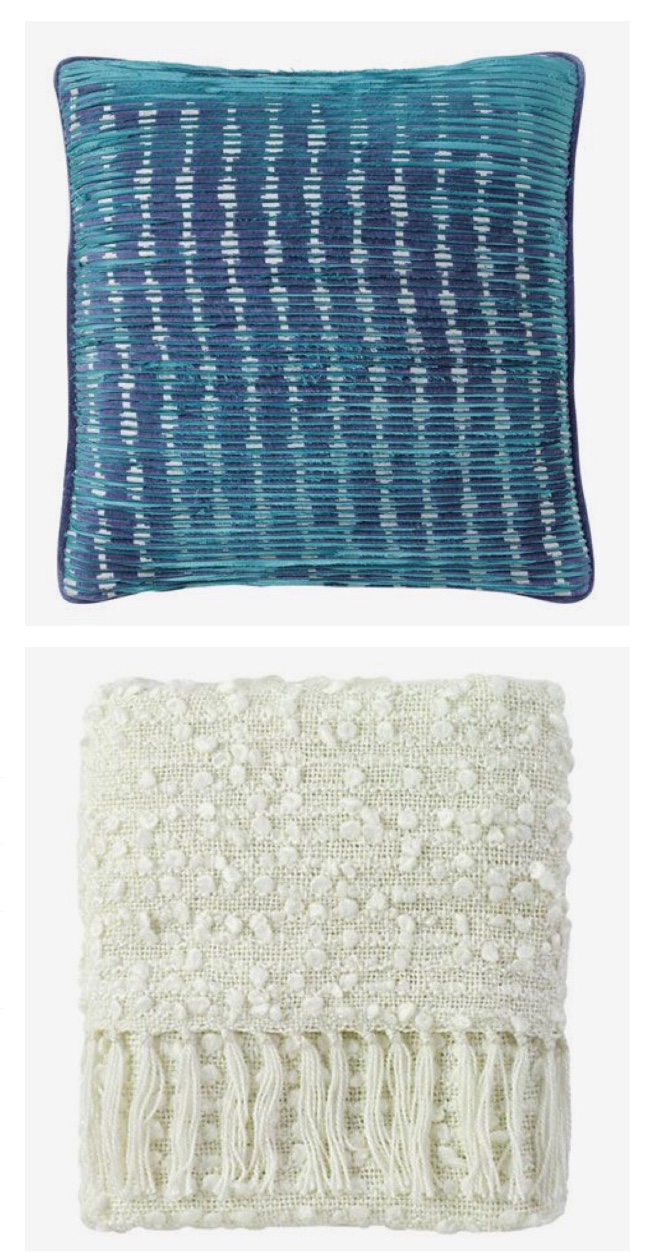 If you remember, Bellacor also donated my modern floor lamp which I am totally in love with. 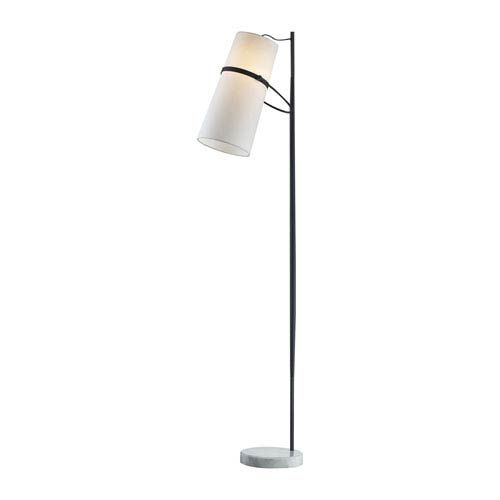 Couture Lamps, another One Room Challenge sponsor also has plenty of items besides lamps. From Couture Lamps I chose these beautiful malachite book ends and box.

I also chose these cool rubber wood and resin balls from Couture Lamps. IT’s always good to have a group of three of something when styling a bookcase or coffee table. 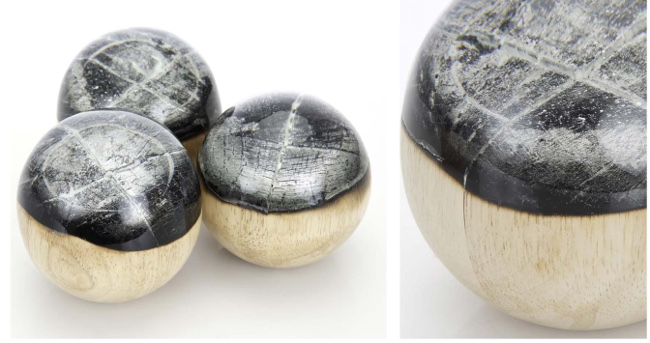 I have now showed you almost everything that is going into my pied-a-terre. I revealed the items one at a time over the past five weeks for a reason. This is how I was loaned or received things, one at a time, piecemeal. I would NEVER recommend decorating a room this way but in my case it was the situation so I dealt with it as best I could. My challenge from the beginning was to put everything together and NOT have it look like a hot mess at the end. Next week at the reveal you will be the judge if I pulled it off or not.

I have some exciting news as well. If you are local and would like to see my room in real life, please stop by the Boston Design Center next Wednesday May 9th at 2pm.Details are below. I’ll be there and would love to see you! 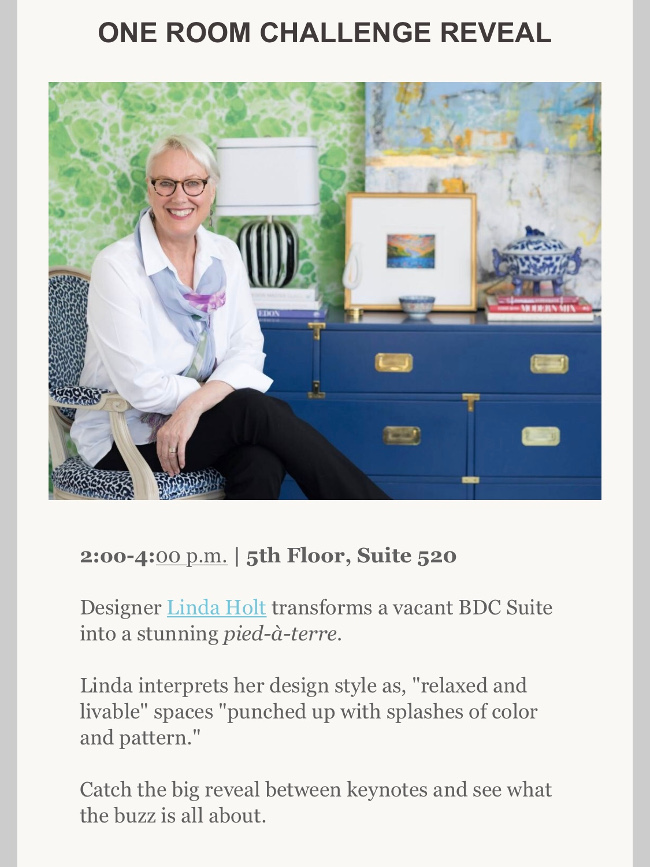 You can follow all my progress up until now  by reading  Week One,   Week Two,   Week Three,  Week Four

Be sure to check in on how the other nineteen participants are doing with their One Room Challenge Week Five and on Thursday all the link up participants.

For those out there that believe you have to have

Have you downloaded my free guide “Five Steps to

As a color lover, it really struck me that KBIS, a

Most people assume a bright sunny day is the best