2018 Interior design trends from High Point Market part three. If you missed part one and two you can catch up below:

Today I want to highlight three additional trends that I observed during my time at Fall High Point Market. As in my previous two posts, I will let the photos do most of the speaking.

One trend that stood out to me this market was the non traditional use of materials in design. Metal, plaster, rope and rattan were used in unexpected ways in both furniture and lighting.

This sheet metal chandelier from Hudson Valley Lighting is both elegant and industrial.

We don’t traditionally think of club chairs as being made from solid metal.  These two from Bernhardt were surprisingly comfortable!

The metal sides on this white wood desk from Bernhardt reminded me of organ pipes. Unexpected but beautiful! 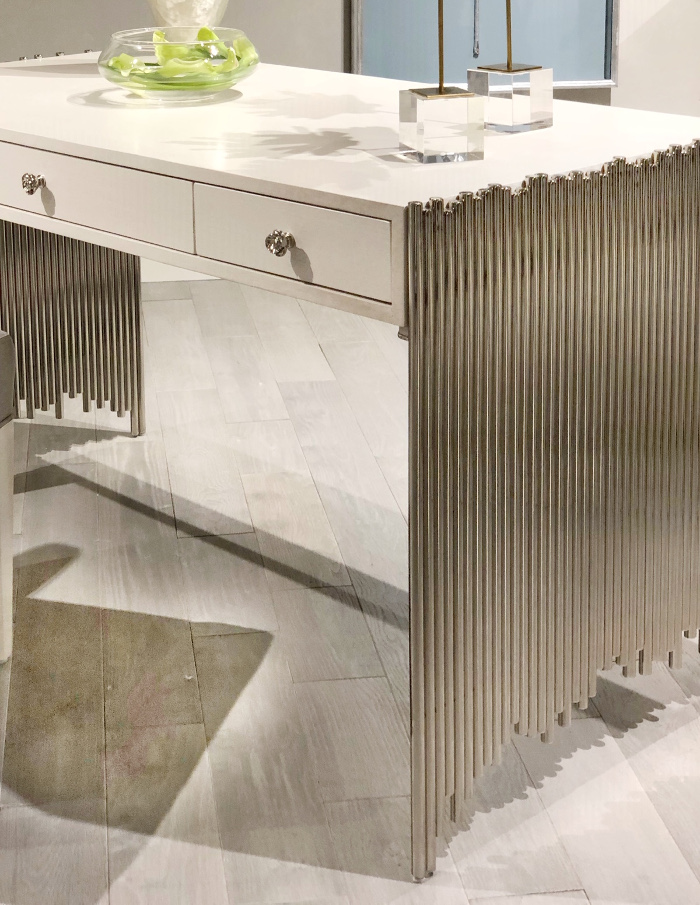 Over and over at Fall Market I saw lights, accessories and table bases that appeared to be dipped in plaster. Plaster is not the first thing that comes to mind when I think about a pendant light but this one spotted at Mr. Brown was wonderful. 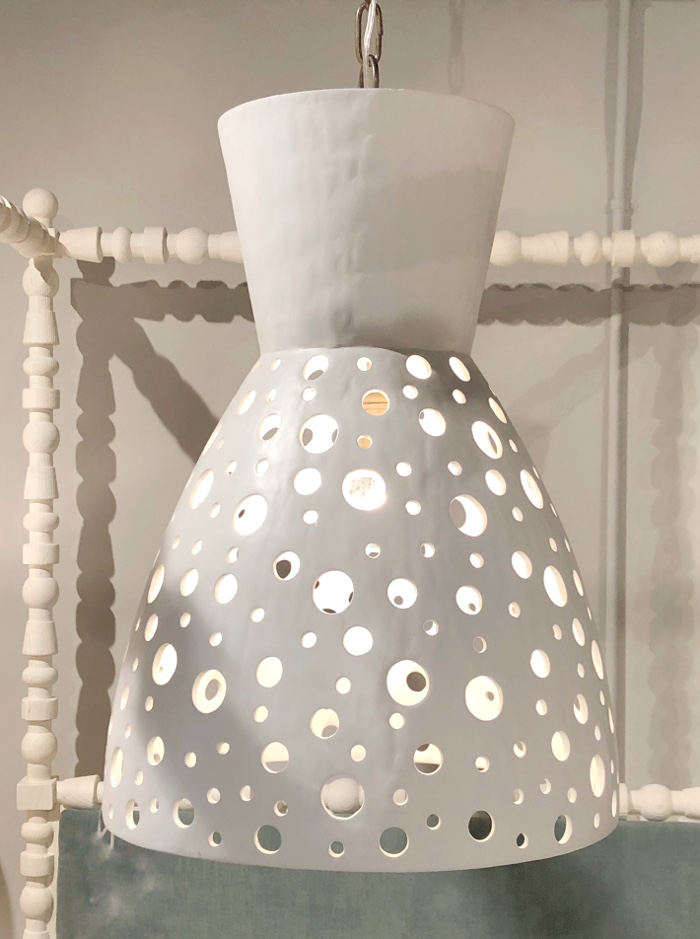 Bernhardt showed off this new table that appeared to be dipped in plaster.

Decorative objects also had that dipped in plaster look. 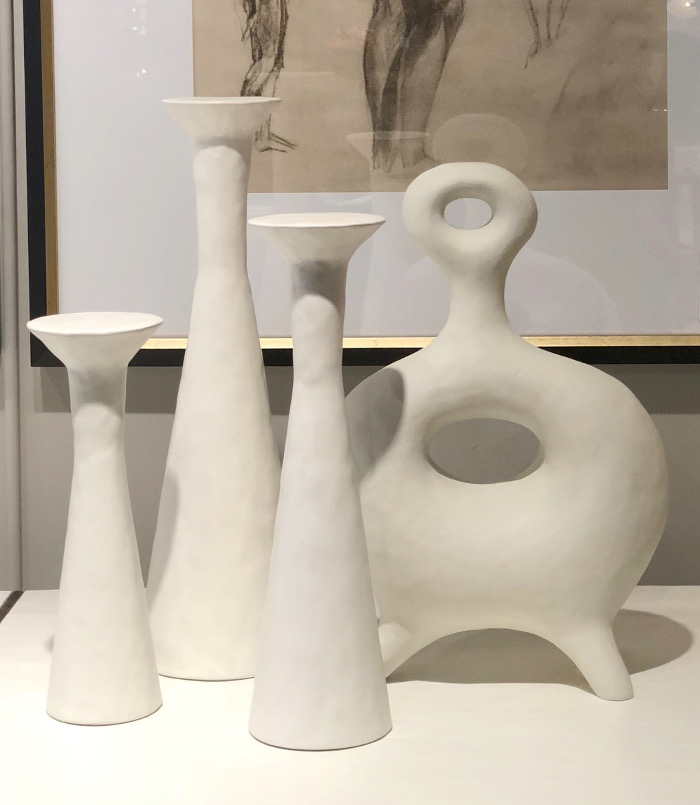 I love this simple white chandelier from Hudson Valley Lighting. It’s impossible to tell in the photo but even the finish felt chalky like plaster.

The return of the 70’s in design and the popularity of boho style has caused a surge in the use of both rattan and rope. Similar to the use of metal and plaster though, these materials were used in unexpected ways. This ottoman from Surya was made of rope. Even though you can’t tell the scale this is a full size ottoman that supports an adult sitting on it. 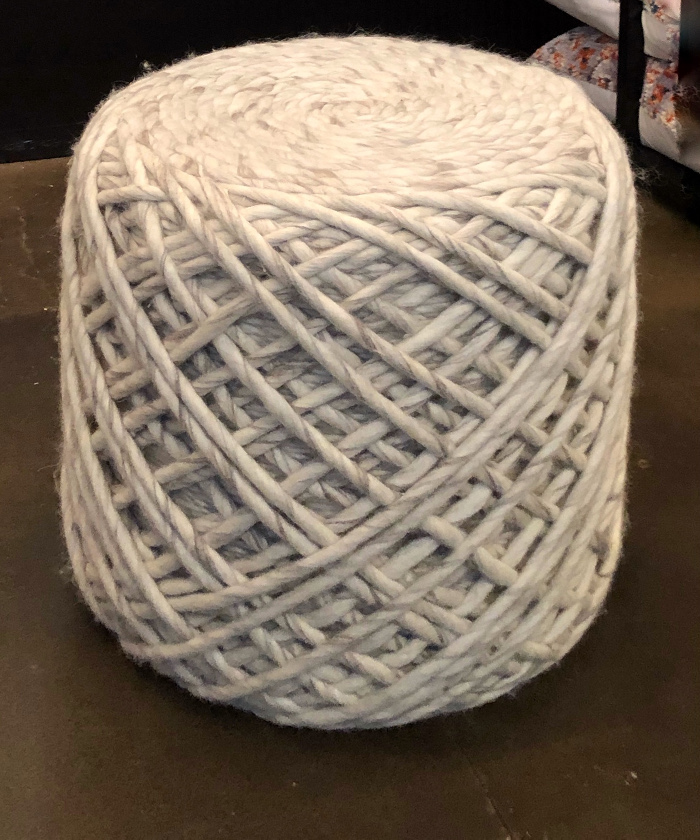 I saw more rope pendants and chandeliers this Market than I ever have in the past.

Rattan was also very popular for use in lighting. 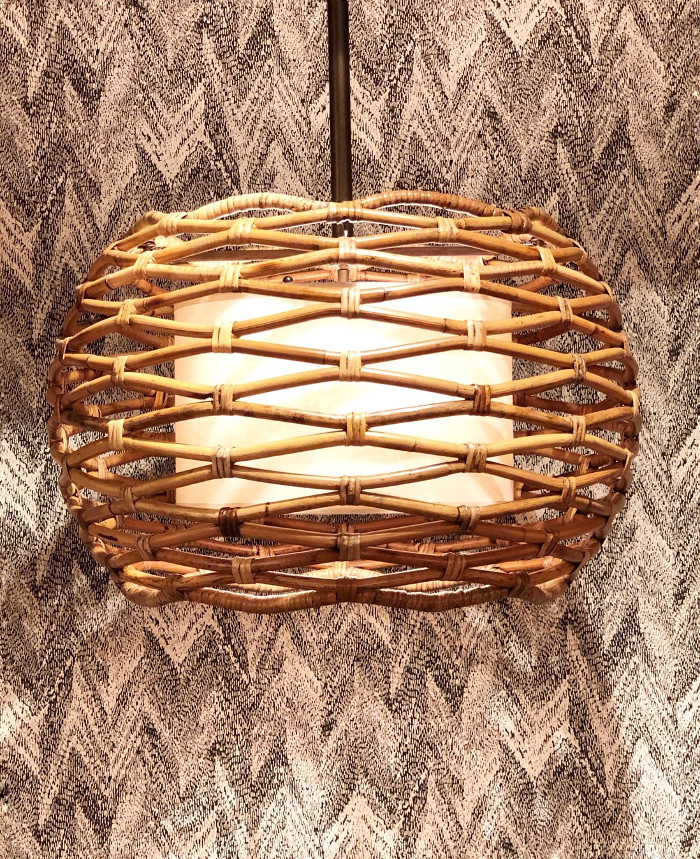 Another rope fixture below from Palecek 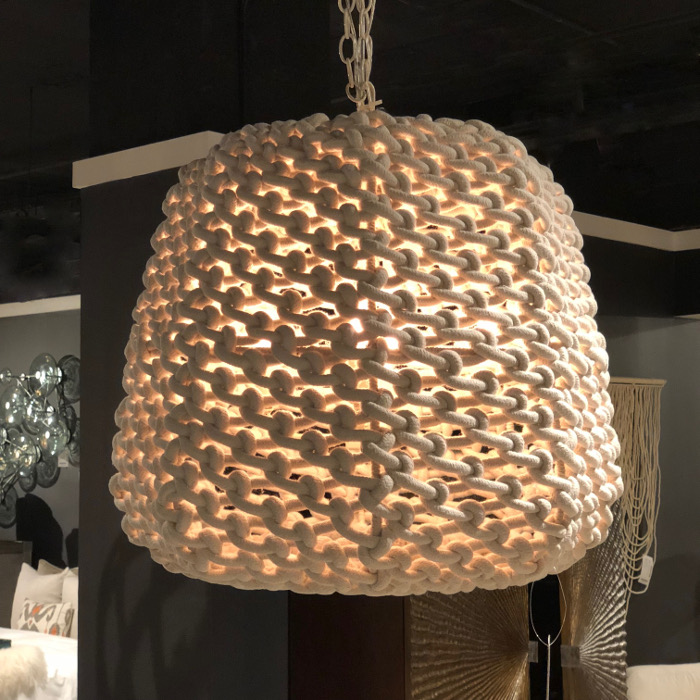 If I had to pick a single, hot decorative object right now, it would be crystals. Crystals were EVERYWHERE!!! Quartz, selenite, agate…you name it! This mirrored chest from Bernhardt had striking large white agate knobs.

Kathryn McCoy had an entire booth dedicated to objects made with crystals. Everything is custom made and almost anything can be created. Wouldn’t that huge crystal bowl be fabulous on a big round entrance table? Maybe filled with ice and bottles of champagne! 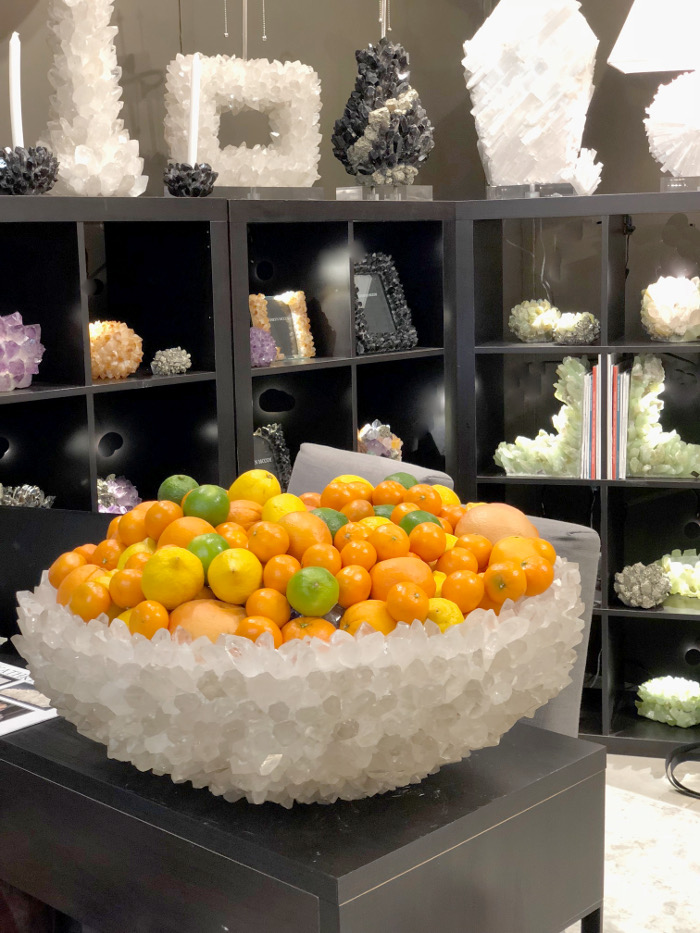 Lot’s of showrooms used crystals as styling props on tables. 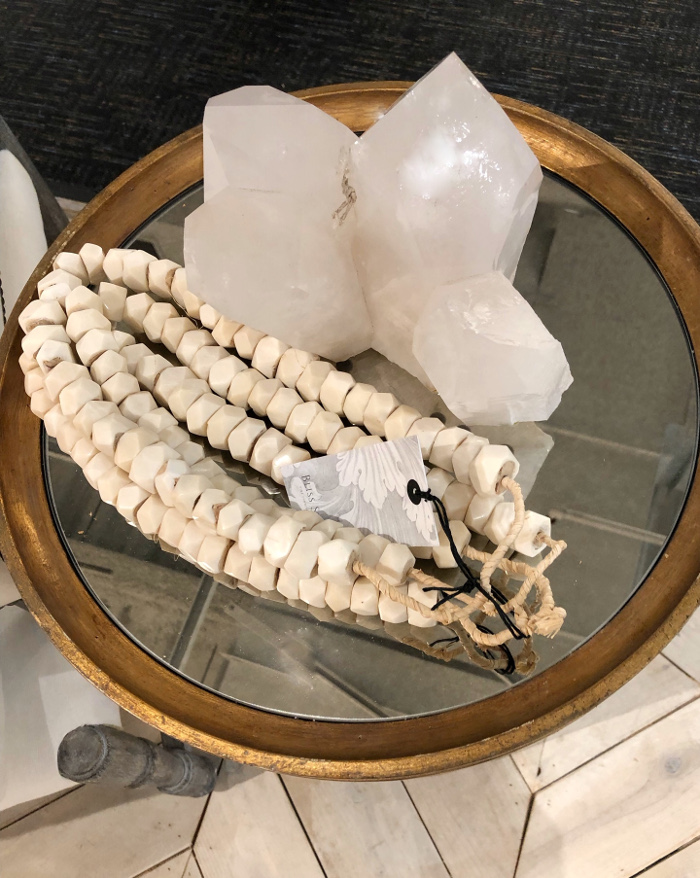 Remember all the sea urchins from years back? Well crystals have replaced urchins as styling decor. 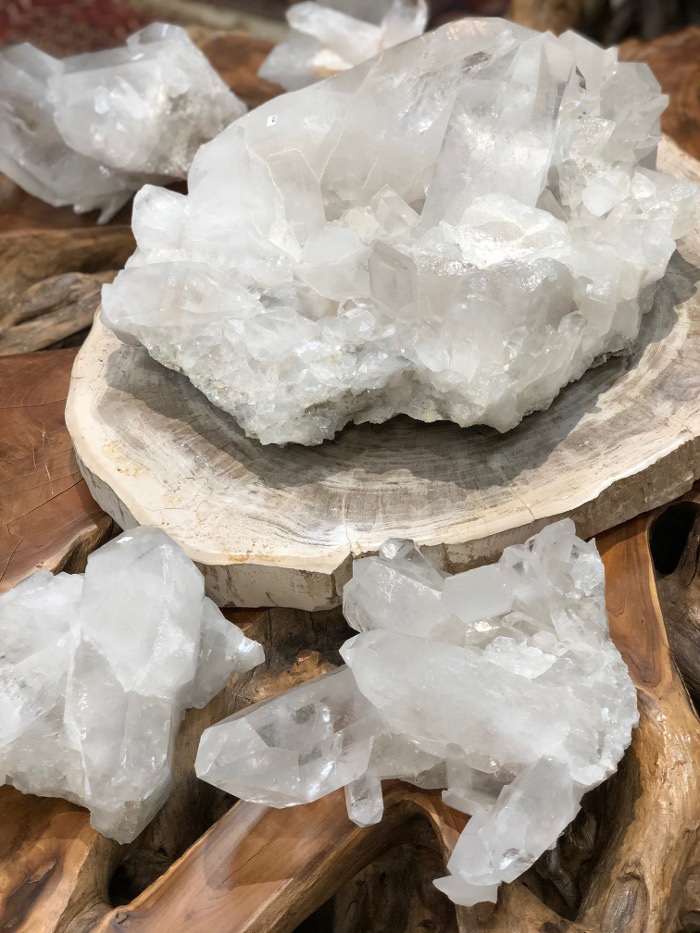 The chandelier on the left is made with gold metal and agate slices. The one on the right is gold metal that appears to be fine gold ribbon. I don’t know how they create the ribbon like quality but it is one more example of a material being used in a non conventional way. Both chandeliers are from Hudson Valley Lighting 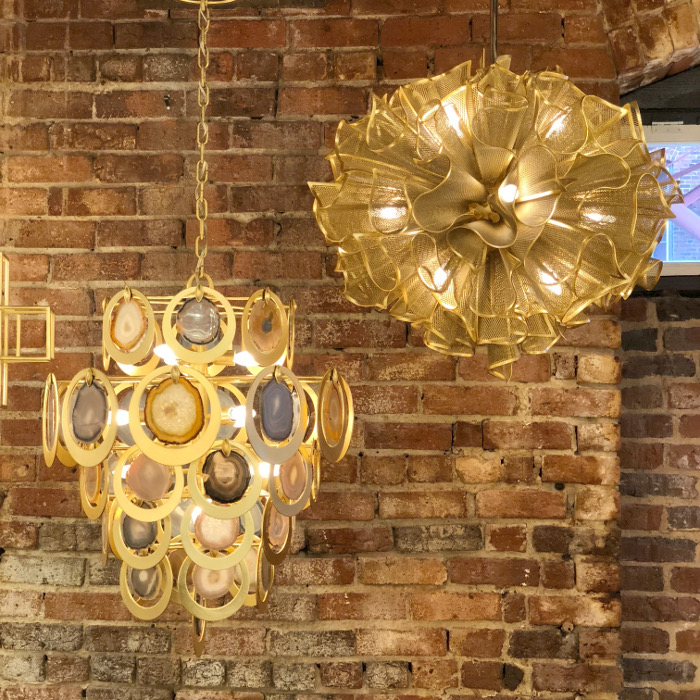 I am officially declaring that performance fabrics are NOT a trend. Most of us live a more casual lifestyle than we did a decade or two ago and we don’t want to fret about about things getting dirty. Dogs, kids, and red wine drinking adults want to enjoy all the rooms in the house. Worrying about spills and stains is no longer necessary with today’s performance fabrics. The number one name in performance fabric is Crypton. I began specifying Crypton to my clients ten years ago when it was somewhat of an “insiders” secrete. Now Crypton is quickly becoming a household word.

When I first started using Crypton it was somewhat “stiff” and there were limited color choices. Today all that has changed and it’s nearly impossible to tell the difference between Crypton and any other fabric. The color choices are in the hundreds (thousands?). Look at this wall display of Crypton samples seen at Thibaut. So many choices of neutrals, beautiful bright colors and patterns.

Before Crypton, a white sofa would not have been practical for a family with pets or kids. Crypton has solved the problem and spills bead up and roll off or can be easily wicked away.

The “hand” of the fabric (designer speak for the feel of the fabric) is so soft and the new patterns I saw at Thibaut are very exciting.

As a designer, I see no reason NOT to use performance fabric on all upholstery pieces. Of course you can always take the second step and have a non performance fabric treated but why go to all the bother when Crypton has you covered.

That wraps up my third and final trend report from High Point Market Fall 2018. I’d love to hear your feedback. What are you loving..or not? 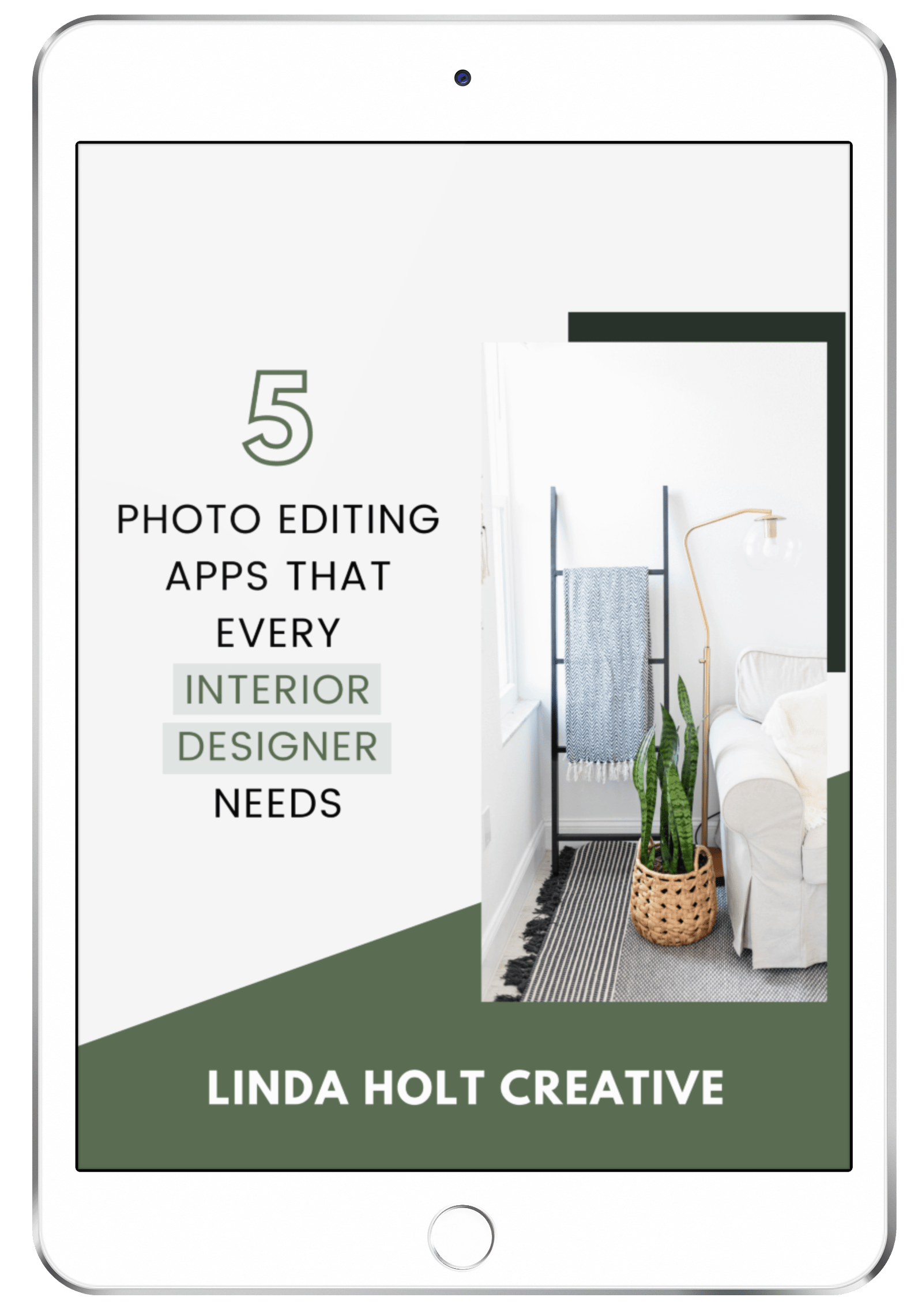 I spotted a return of the curio cabinet at Fall Ma

White stained furniture is having a moment in fur

The new Gabby showroom was stunning. Lots of prett

Black and white were overall the most popular colo

White stained, wire brushed furniture is having a